Each evening in the summer the Association of Licensed Battlefield Guides sponsors a free walk of the Soldiers National Cemetery as an extension of the National Park Service’s daily interpretive program.  These walks are under the leadership of an experienced Licensed Battlefield Guide (LBG) and begin at the rostrum near the Taneytown Road entrance. The walk begins promptly at 5:30 and last approximately an hour and a half ending with the nightly “Taps” program sponsored by the Lincoln Fellowship. A different LBG conducts the tour each evening. Each guide delivers a program that is both unique and comprehensive and is an excellent way to end your day on the Battlefield learning about the development of this “Hallowed Ground” and the stories of some of the individuals buried in it.  You may hear the story of Lt. Colonel Max A. Thoman of the 59th New York, the highest ranking battle casualty buried in the Cemetery or the poignant story of Sergeant Amos Humiston who’s body was identified from the picture of the his three young children clutched in his hand when his body was found. Over 3,500 dead from the battle are here today and each had his own story.  Walks are at an easy pace covering both pavement and grassy areas.  Stories are told of the many soldiers who gave their lives in the Battle of Gettysburg and rest in Soldiers Cemetery today. Each LBG includes the visit of Abraham Lincoln and the delivery of the famous “Gettysburg Address” in November of 1863. That site will be pointed out to all participants.  The LBG will generally stay around for awhile after the TAPS ceremony to answer any specific question visitors may have. Walks will take place in all but the most violent weather. So if you and your family would enjoy a walk before or after dinner with a knowledgeable LBG please join us!!!

The ALBG Cemetery Walk program will begin in 2021 on Friday and Saturday evenings in May weather permitting and then nightly from Memorial Day through Labor Day.  No reservations are required.  Each walk is free. Park in the National Cemetery Parking lot off Taneytown road (the old Cyclorama Parking lot) and walk up through the gate to the Rostrum, a large brick platform located near the Lincoln Speech Memorial. 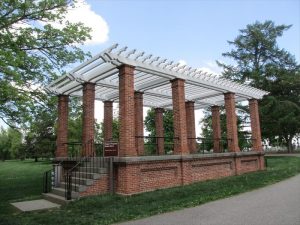 The Soldiers National Cemetery was once an integral part of each and every battlefield tour whether led by a Licensed Battlefield Guide or simply using the self-guided brochure.  The Cemetery was open on both the Baltimore Street and Taneytown Road gates and cars, vans and buses all were directed to go through the Cemetery as part of the tour route.  As early as 1977 the National Park Service  had identified heavy vehicle traffic through the Cemetery as a major obstacle to achieving  its purpose of honoring the soldiers buried there. The Gettysburg National Military Park’s 1982 General Management Plan recommended a gradual elimination of all Cemetery traffic and shortly afterwards the Cemetery loop road was closed with vehicles only permitted to pass from Baltimore Street through to the Taneytown Road via what was then termed the lower loop.  On May 27, 1989, park Superintendent Dan Kuehn finally closed the National Cemetery to all vehicular traffic stating “…we believe the time has come to eliminate all the noise and confusion of cars and buses and to accurately restore this sacred ground to its intended appearance and purpose.”  The closure of the National Cemetery and the difficulty of finding parking led to a marked drop-off in the numbers of visitors coming in to the cemetery grounds.

Not all guides were happy with the decision to close the National Cemetery accurately predicting it would prevent many visitors from seeing the historic cemetery and the spot where the famous Gettysburg Address was delivered. They made a push to have the decision overturned and the Cemetery reopened to traffic.  A survey of all guides was instituted by the Guide’s Association and the results were presented to Superintendent Kuehn that same August.  Twenty-six guides asked to have the Cemetery reopened to vehicles and in typical guide fashion another twenty-six asked the Superintendent to keep it closed. The remaining thirty-nine LBG’s did not care one way or another. In a letter to his management team that August, Kuehn announced the closing would remains permanent noting that aside from LBGs he had only received one complaint from the general public.   Many guides by this time had volunteered to do a special evening Cemetery walks to keep their skills sharp and Superintendent Kuehn wrote in his report: “Incidentally, I would like to note that some of the Battlefield Guides are so proud of the Cemetery that they have been giving free programs in the Cemetery for the public. Their public spirit is wonderful and I salute it!”

With the permanent closing of the Cemetery many guides, who for years had included a required stop in the National Cemetery as part of each tour, indicated that they wished to continue taking people into the cemetery.  Two projects were proposed to the Superintendent at the time.  First, was renewal of a longtime request to place flags on the graves of all battle veterans on the anniversary of the battle.  This had been requested in the past but turned down due to the risk of flag damage from the constant traffic.  The closure of the cemetery removed this ojection and the park approved.  Since the summer of 1989 the members and friends of the Association of Licensed Battlefield Guides has proudly placed flags on those graves each battle anniversary. 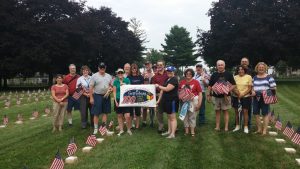 The second project was a formalization of the practice of giving volunteer evening Cemetery Walks.  In the two years since the 1989 closing, fifteen Licensed Battlefield Guides were regularly giving a 6 PM Cemetery Walk during the summer programming season under the auspices of  the NPS “Volunteers-in-the-Parks” program.  This walk coincided with the closure of the National Park Visitor Center which was then conveniently located directly across the street from the Taneytown Road gate.  The Center would announce it was closed and requested visitors to vacate the building. To facilitate clearing of the building Park Rangers also that a free cemetery walk would start promptly at 6 at the Rostrum. Crowds, accordingly, were fairly large.  Following the close of the formal walk the guide would remain in the Cemetery until 8 PM to answer visitor questions and hand out park brochures.  Despite the Visitor Center’s move to a new facility on Baltimore Street in 2008 and the demolition of the old Taneytown Road center, the tradition has continued.

Today, the Association of Licensed Battlefield Guides is proud to continue the now  thirty-three year tradition of honoring the Gettysburg battle dead throughout the summer with our evening Cemetery Walk and the placement of flags on graves over the battle Anniversary.  Visitors are welcome to join us. 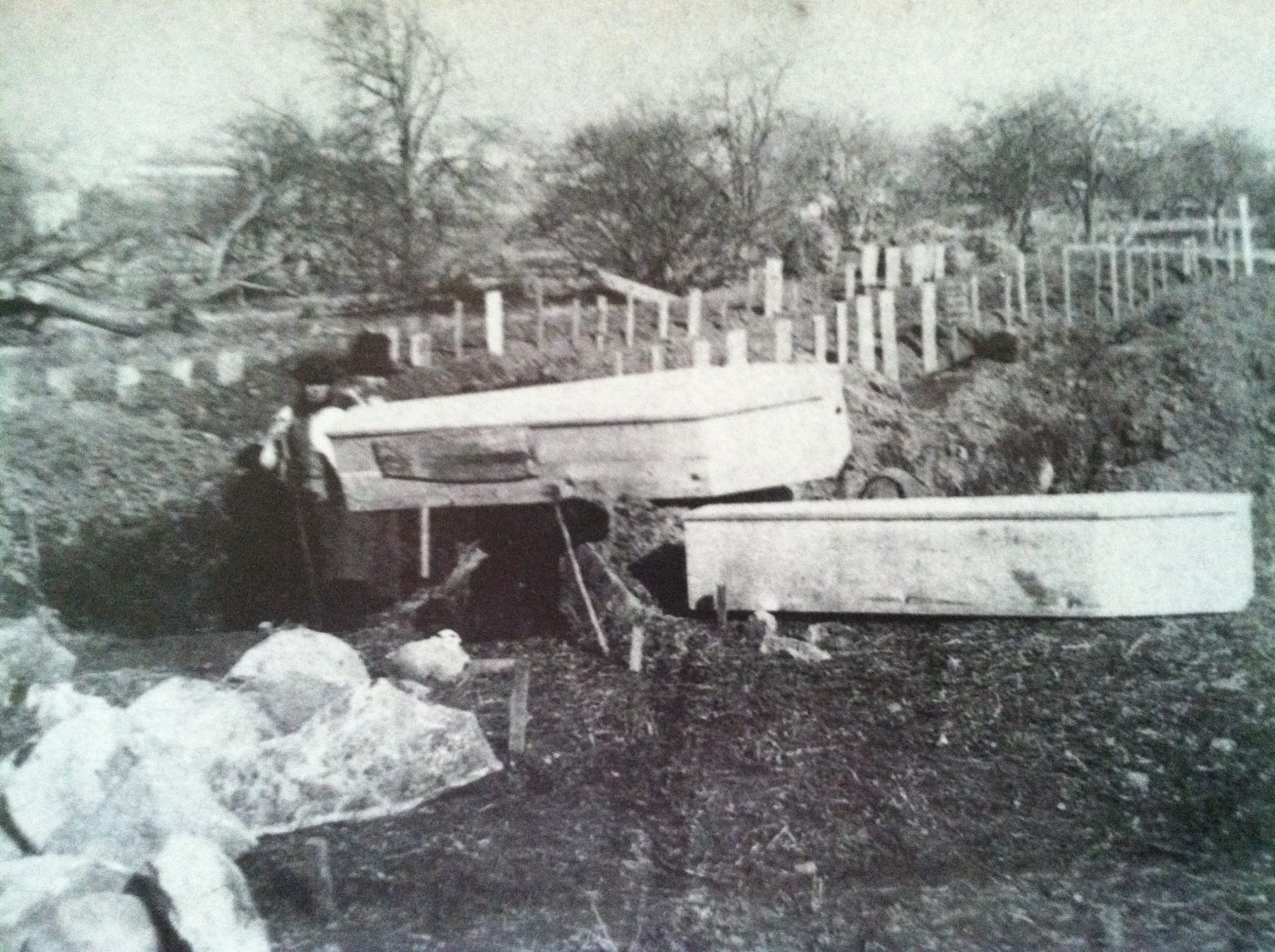 The reburial of the dead. 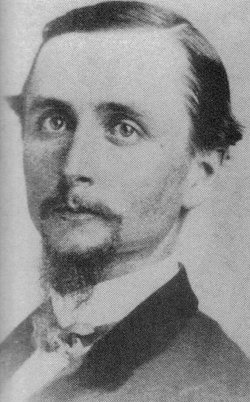 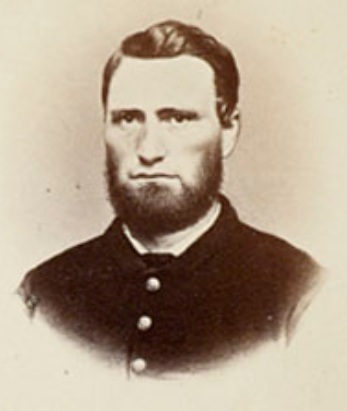 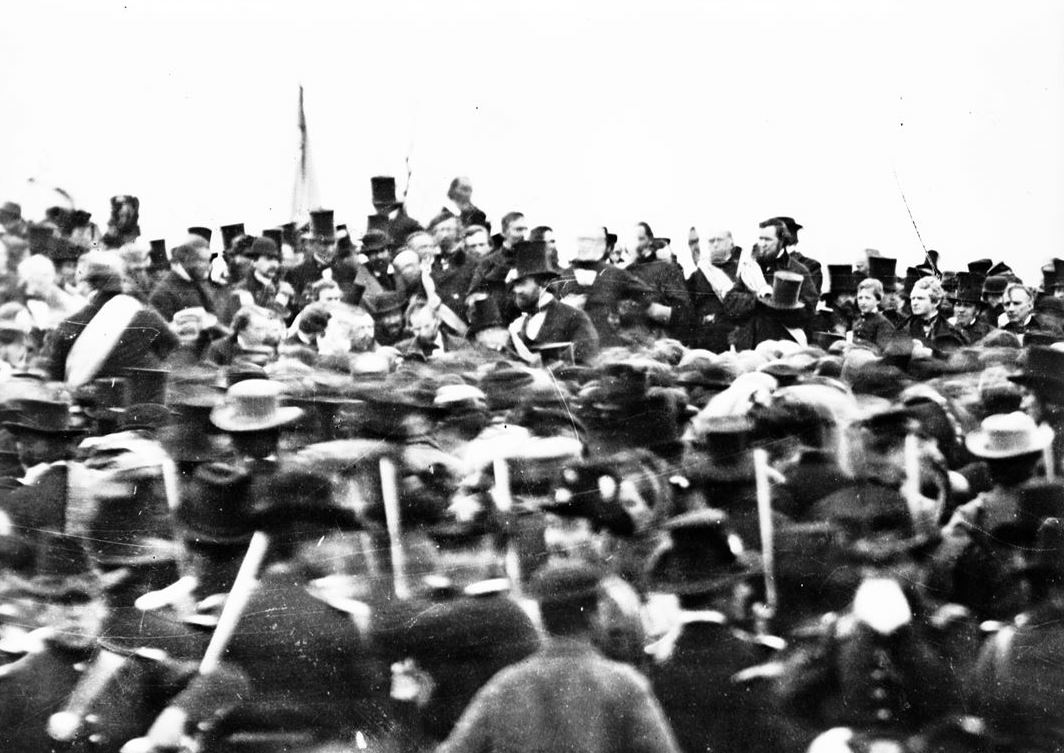