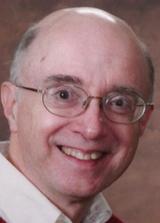 We are shocked and saddened by the news received this day that LBG Dave Gutknecht, Badge #221, suddenly passed away.  Dave was last in to work on March 17 and appeared in perfect health.  He scored #1 in the draw that day – an enviable place for any LBG.

We publish his obituary for the benefit of those without email: David Ross Gutknecht, MD, 66, of Danville, entered into the Lord’s presence on Saturday, March 31, 2012, at the Geisinger Medical Center, Danville, surrounded by his loving family.

David was born Aug. 16, 1945, in Plainfield, N.J., to the late Henry and Helen (Ross) Gutknecht. He graduated as valedictorian of his class at Nutley Senior High School, Nutley, N.J., in 1963. In 1967, David received his undergraduate degree in zoology from Cornell University where he was a brother in Psi chapter of the Pi Kappa Phi fraternity. He received his medical degree from Cornell University Medical College in 1971.  He completed a residency in medicine and was chief resident in ambulatory medicine at the Milton S. Hershey Medical Center. He also served his country as a Major in the Air Force, Medical Corps, at Loring Air Force Base, Maine, from 1973 to 1975.

For the past 35 years, he was an associate in the Department of General Internal Medicine, Geisinger Medical Center, and served as director of that department from 1987 to 1994.  Professional organizations of which he was a member include the American College of Physicians (Fellow), Society of General Internal Medicine, and the Association of Program Directors in Internal Medicine. From 1989 to 1995, he served as editor of the Geisinger Bulletin. David wrote a number of papers and chapters published in national journals and other media.

He had an ongoing passion for teaching and educating beginning physicians. During his career, David served as Clinical Professor of Medicine for The Milton S. Hershey Medical Center, Jefferson Medical College, and Temple University School of Medicine. He received the Golden Apple Award as Teacher of the Year in 1998 and was currently serving as Grand Rounds Coordinator and Director of the General Internal Medicine Fellowship.

He attended First Baptist Church, and for 20 years was a member of the Susquehanna Valley Chorale and a frequent soloist. He served two terms on the chorale’s board of directors.

David had a lifelong love of history with a special interest in the Civil War, specifically Gettysburg.  He was a member of Friends of the National Parks at Gettysburg, the Civil War Preservation Trust and an associate member of the Association of Licensed Battlefield Guides. He was most proud of his accomplishment in becoming a licensed battlefield guide and enjoyed conducting tours at Gettysburg since 2006.

David is survived by his beloved wife, Donna (Sacks), with whom he celebrated 43 years of marriage in December, and three children, Kristin O’Rourke,  Andrew Gutknecht, and Liesl Lewis.  He was blessed with three granddaughters, Chelsea, Olivia, and Lily, and was expecting another grandchild later this year.

Friends are invited to call from 6 to 8 p.m. Tuesday at First Baptist Church, 20 Brookside Drive, Danville. A funeral service will then be held at the church at 1:30 p.m. Wednesday with the Rev. Dr. Harry H. Wonderland officiating. Burial will follow in Odd Fellows Cemetery. Military rites will be accorded by the Air Force Honor Guard. In lieu of flowers, donations may be made to the Gettysburg Foundation, P.O. Box 4629, Gettysburg, PA 17325, www.gettysburgfoundation.org, or Susquehanna Valley Chorale, 570-523-1041, www.svcmusic.org.  Arrangements are under the direction of Visneski Funeral Home, Inc., 10 W. Mahoning St., Danville, www.visneski.com.