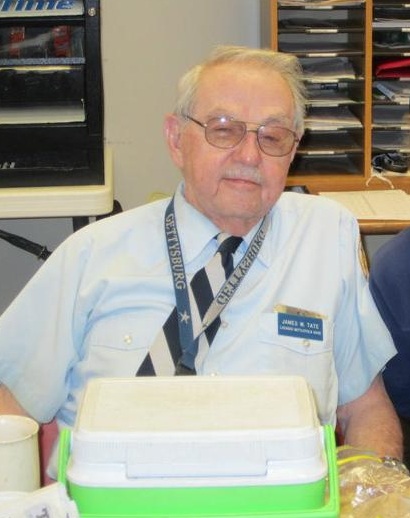 Mr. Tate was a member of the Gettysburg United Methodist Church. He was a 1937 graduate of Gettysburg High School and attended Gettysburg College before graduating from the Bliss Electrical School in Baltimore, MD. Jim was a veteran of World War II serving as a sergeant in the 28th Division, 104th Pennsylvania Calvary in Italy and France. He was also appointed to the Pennsylvania “Governor’s Troops”.  Following the war, Jim was employed at Westinghouse Corp for 7 years and then IBM for another 7 years. For most of his career he was employed at Warren
Products in West Pittston, PA until his retirement in 1979.

Jim was a member of the Gettysburg American Legion, the Gettysburg VFW and the Gettysburg Eagles. Jim was a Licensed Battlefield Guide for over 60 years and was featured in a Philadelphia Inquirer article this summer. He loved spending time on the battlefield and sharing stories with the many people he came in contact with.

Funeral Services will be held Saturday, January 19th at 11:00 AM from Monahan Funeral Home in Gettysburg, PA with Rev. Jay Zimmerman officiating. Interment will be in Evergreen Cemetery, Gettysburg, PA. There will be a viewing at the funeral home on Saturday from 9:30 AM until the time of the service.  Memorials can be made to the Wounded Warrior Project, PO Box 758517, Topeka, KS 66675 or got@woundedwarriorproject.org. Following the interment the Licensed Battlefield Guides will be hosting a reception at the Bethel Mennonite Church, 2335 Biglerville Road, Gettysburg, PA..