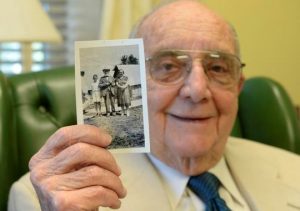 William E. Troxell, 93, of Gettysburg, passed away on Thursday, December. 12, 2019, at Gettysburg Center. He was born on Oct. 4, 1926, in Gettysburg, the son of the late Harry J. and Tillie Garver Troxell, a direct descendant of John Troxell, the first settler of Gettysburg. His wife, Ellen Virginia “Honey” Troxell died in 2018. Bill graduated from Gettysburg High School and attended Gettysburg College from 1946 to 1947. He graduated from Lycoming College in 1951. He completed graduate studies at Western Maryland College, Shippensburg University and Penn State University. He received varsity football letters from both Gettysburg High School and Lycoming College. He was a veteran of World War II serving in the U.S. Army, and later served 12 years in the U.S. Army Reserves. He resigned from the Army Reserves as a captain in October 1965. Following college, Bill was engaged in inventory control for John L. Roebling Sons, a steel manufacturing company (the firm that built the Brooklyn Bridge), in Trenton, New Jersey. From 1952 through 1957, he was employed by the Sun Life Assurance Company of Canada, first as a sales representative and later as a district supervisor. From 1957 through 1961, he was involved in inventory control, purchasing, and office management for the Pennsylvania Public School Building Authority in Harrisburg, Pa. In 1962, he was employed by the Adams County Superintendent of Schools (Lincoln Intermediate Unit 12). For the next 29 years, he served the Intermediate Unit in a number of capacities, as a teacher, football coach, athletic director, and as a diversified occupational coordinator. During the years of 1972 through 1974, he was the president of the Lincoln Intermediate Unit Professional Employees Organization. He was a member of the Gettysburg Country Club for 53 years and served as on the board of directors for several years. He was also a member of the Albert J. Lentz American Legion Post 202. Bill was a Mason with membership in the Good Samaritan Lodge No. 336 of Free and Accepted Masons. He was a Gettysburg Licensed Battlefield Guide (1991-2016), and a member of the Adams County Historical Society. He was appointed to the National Park Advisory Commission by the Secretary of the Interior. Bill was elected to the Gettysburg Borough Council in 1991 and served as a councilman (vice president 1996-1997) until December 1997, when he was appointed to the office of mayor of Gettysburg. In the general municipal election in November 1999, he was elected to the office of mayor for a two-year term with 89 percent of the vote, reelected in 2001 with 92 percent of the vote, and finally in the 2005 election he was elected to a four-year term with 85 percent of the vote. During the years that Bill was mayor, many borough projects were undertaken and completed, the renovation of the Majestic Theater, restoration of both the Wills House and the Gettysburg Train Station, building a third deck on the parking garage, new signage around town and Steinwehr Avenue beautification. Mayor Troxell is survived by a daughter Penny Ann Monforte and her husband Steven of Gettysburg; a son William E. Troxell Jr. and his wife Tina of Orrtanna; three grandchildren, Kristi Monforte Raffensperger, Melissa Miller, and Travis Nathaniel Troxell; and a great-granddaughter Caton Elizabeth Raffensperger. Bill was predeceased by a brother Harry Troxell. Funeral services will be held Thursday, Jan. 9, 2020, at 11 a.m. from the Monahan Funeral Home in Gettysburg. The family will receive friends at the funeral home from 9 a.m. until the time of the service. Interment will be in Evergreen Cemetery, Gettysburg. In lieu of flowers, memorials can be made to the Adams County Community Foundation, 25 S. Fourth St., Gettysburg, PA 17325.